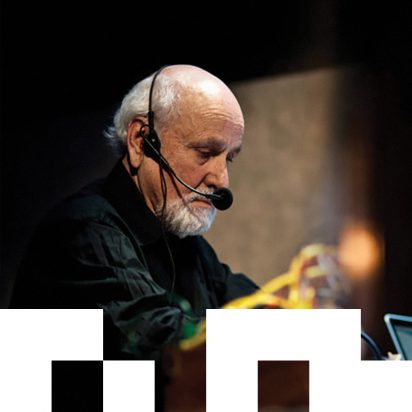 
First round of festival artist talks accompanied by a Q&A session. Morton Subotnick and Lillevan will talk about their work. Free entry.

Morton Subotnick is one of the pioneers in the development of electronic music and an innovator in works involving instruments and other media, including interactive computer music systems. The work which brought Subotnick celebrity was Silver Apples of the Moon [1966-7], was commissioned by Nonesuch Records, marking the first time an original large-scale composition had been created specifically for the disc medium – a conscious acknowledgment that the home stereo system constituted a present-day form of chamber music. He is also pioneering works to offer musical creative tools to young children. He is the author of a series of CDROMS for children, a children’s website [www.creatingmusic.com] and developing a program for classroom and after school programs that will soon become available internationally. He tours extensively throughout the U.S. and Europe as a lecturer and composer/performer.
http://www.mortonsubotnick.com/

Lillevan is an animation, video and media artist. He is perhaps best known as founding member of the visual / music group Rechenzentrum (1997-2008).
Lillevan has performed and collaborated with many artists from a wide array of genres, from opera to installation, from minimal electronic experimentalism to dance and classical music; performed and exhibited all over the globe, and at all the major media festivals.
For Lillevan a working process takes place in a Godard-like search for the relationship between images, intensities and textures. Lillevan sees his work as a multi-layered process, giving each viewer the opportunity to focus on different details and moments. Human perception remains the final interactive element of live video composition, while returning images to their original ambiguity, escaping the imperative nature of traditional montage, creating unsolvable tasks for new software and creating new and unexpected relationships between non-related imagery.
http://www.lillevan.com/