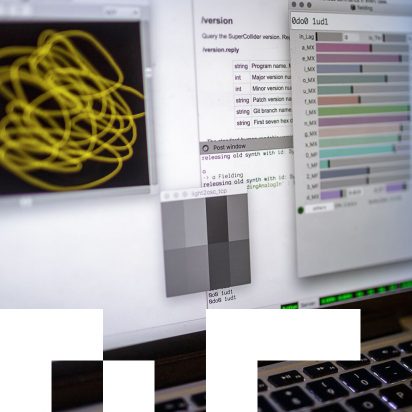 
Artist, musician and leader of the Fielding Workshop TIll Bovermann will give a talk about his projects. Free entry.

Till Bovermann studied and worked at Bielefeld University where he received a PhD for his work on Tangible Auditory Interfaces. He worked as a post-doctoral researcher on tangible and auditory interaction at the Media Lab of Aalto University, Finland and was the principal investigator/UdK Berlin of the project 3DMIN — Design, Development and Dissemination of New Musical Instruments, a collaboration between UdK Berlin and TU Berlin, funded by the Einsteinstiftung Berlin.

Till has been teaching instrument design, dynamic systems and sound technology at international institutions, such as the institute for time-based media, UdK Berlin, Aalto University/Helsinki, Uniarts/Helsinki, IMM/Düsseldorf, and Bielefeld University.

With his art works, he addresses relationship of contradictory elements such as urban/nature, digital/physical and algorithm/behavior. Till develops software in and for SuperCollider.
http://tai-studio.org/